The fake banks of the Comoros Islands 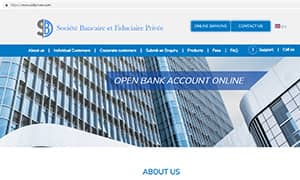 By now, this scam’s scheme has been going on for two decades, but there are still a lot of people who are being scammed. The other day a friend of mine called, asking me how he could cash a check from a bank in the Comoros Islands, the Société Bancaire Fiduciaire Privée Bank (SBFP). “It’s a scam,” I quickly told him. It took three days to convince the poor guy that he had been scammed! His story is the same as that of many others who stayed still at the time when opening an offshore bank account was easy. Today, it’s almost impossible, the road has been paved for scammers who have perfected their scams, have invested and know the market well.

How to investigate the existence and reputation of the offshore bank

Let’s take a look at what my friend should have done to analyze the presumed bank:

We can establish from this short investigation that’s not hard to start searching for banking scams, but it’s not easy, either, because scammers have evolved, they have a more attractive internet banking façade than some real offshore banks, increasingly more sophisticated websites and professional scammers ready to explain to you why their banking license is real. Then, on a legal level, it’s difficult to attack them because they work with virtual addresses, virtual phones and who work with VPN from their own homes. Therefore, it’s hard to establish where the crime has been committed and the reports, generally, end up going nowhere, also because many people don’t want to tell an authority that they have sent money (maybe even undeclared) to a supposed offshore bank. Furthermore, the fact about the check that my friend commented on is very intelligent, since many jurisdictions allow checks to be issued by a company and so, if the impossibility of cashing in on this debt claim can’t be proved, they will be unable to prove there was a scam.

In addition, you have to keep in mind that their strong point is ignorance (in the sense of lack of knowledge) and so they envisage fake banks, not only in the Comoros but also in other under-developed countries like Vanuatu, Somalia, etc., all little-known countries, with poor communications and uncooperative officials.

Our services will protect you from offshore scams