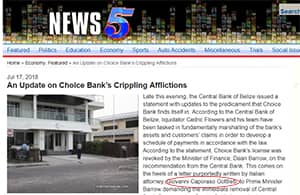 Late this evening, the Central Bank of Belize issued a statement with updates to the predicament that Choice Bank finds itself in. According to the Central Bank of Belize, liquidator Cedric Flowers and his team have been tasked in fundamentally marshalling of the bank’s assets and customers’ claims in order to develop a schedule of payments in accordance with the law. According to the statement, Choice Bank’s license was revoked by the Minister of Finance, Dean Barrow, on the recommendation from the Central Bank. This comes on the heels of a letter purportedly written by Italian attorney, Giovanni Caporaso Gottlieb, to Prime Minister Barrow demanding the immediate removal of Central Bank Governor, Joy Grant. Gottlieb says he is representing a large number of Choice Bank account holders. In April, the offshore bank suspended all withdrawals from deposit accounts due to a liquidity crisis and in June, it was reported that Choice Bank would be closing its operations, causing jitters among some clients. By July second, customers were allowed to withdraw up to twenty-five thousand U.S. dollars. A day later, in a pre-recorded statement, Grant announced the Central Bank’s decision to revoke Choice Bank’s license. Grant pointed out that the bank’s operations demonstrated weaknesses and violations of the International Banking Act in late 2017 but that the Central Bank had imposed corrective actions. In his recent letter, Gottlieb says that Grant did not comply with “the mandates that the laws of Belize impose on the Central Bank in relation to the Choice Bank crisis.” He says that apart from the customers’ money, Belize’s name and reputation is on the line. Gottlieb wants the Central Bank to allow Choice Bank to liquidate their accounts in an orderly manner.