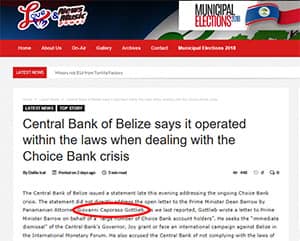 The Central Bank of Belize issued a statement late this evening addressing the ongoing Choice Bank crisis. The statement did not directly address the open letter to the Prime Minister Dean Barrow by Panamanian Attorney Giovanni Caporaso Gottlieb. As we last reported, Gottlieb wrote a letter to Prime Minister Barrow on behalf of a “large number of Choice Bank account holders”. He seeks the “immediate dismissal” of the Central Bank’s Governor, Joy grant or face an international campaign against Belize in the International Monetary Forum. He also accused the Central Bank of not complying with the laws of Belize. In its statement today, the Central Bank’s did make mention that the actions taken in regards to Choice Bank before and during the liquidation process have been in accordance with the laws of the country. The statement provided a detailed outline of what led to the decision of revoking Choice Bank’s license, stating that it “implemented time bound corrective actions but Choice Bank Limited remained non-compliant in a number of instances,” further examination by the Central bank confirmed that Choice Bank Limited was not acting in the best interest of depositors and customers resulting in the revocation of its license on June twenty ninth 2018.The Central Bank has retained the services of liquidator Cedric Flowers who is now marshaling the bank’s assets and customers’ claims in order to develop a schedule of payments in accordance with the law. The Central Bank states that, “the matter is ongoing and sensitive. As the Central Bank continues with the implementation of actions in accordance with the laws of Belize, former clients of Choice Bank Limited are asked to follow instructions issued by the liquidator. The liquidator will oversee all Choice Bank Limited affairs moving forward and any concerns should be directed to [email protected]”.