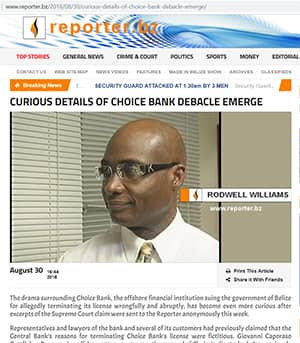 The drama surrounding Choice Bank, the offshore financial institution suing the government of Belize for allegedly terminating its license wrongfully and abruptly, has become even more curious after excerpts of the Supreme Court claim were sent to the Reporter anonymously this week.
Representatives and lawyers of the bank and several of its customers had previously claimed that the Central Bank’s reasons for terminating Choice Bank’s license were fictitious. Giovanni Caporaso Gottlieb, a Panamanian offshore attorney representing several of Choice’s clients, had also previously alleged negligence on the Central Bank’s behalf and called on Prime Minister Dean Barrow for the resignation of CB Governor, Joy Grant, both of whom he claimed had ulterior motives for terminating the license.
The excerpts of the claim sent to the Reporter show Choice Bank Ltd. and its parent company, Choice Group Holding LLC as the claimants while Barrow, as Minister of Finance; the Central Bank and Attorney General Mike Peyrefitte are all named as defendants.
Most curiously and glaringly, Rodwell Williams, Barrow’s long-time law partner, is named in the claim as a Director of Choice Bank. Neither Williams nor Barrow could be reached for comment for this article. The Central Bank has also been very guarded on the issue as well, providing only a number of releases via its website updating on the status of the Choice Bank situation. The allegations against the Central Bank and Grant from Choice have never been addressed publicly by any of the involved parties from government’s side.
The excerpts provided to the Reporter also detail an arrangement Choice had secured with an insurance agency on June 10, which had agreed to assume US $41 million of Choice’s deposit and other liabilities in exchange for the assignment of approximately $US 47 million of Choice’s liquid assets. The claim asserts that Choice would have benefited from substantial savings by entering into the second policy, suggesting that the bank may have found a way to save its clients from losing all their savings.
Gottlieb had also previously told the Reporter that Choice had already announced that it would begin repaying account holders, only to have its license abruptly terminated two days later. The claim also reveals that representatives of Choice, including Williams, met with the “Minister”, presumed to be the Minister of Finance, on June 15 and laid out their plans, requesting approval to enter into the second agreement. According to the claim, the Minister said he was amenable to approving the request and said he was prepared to personally “mediate” between the parties. The claim alleges that at no time did the Minister ever acknowledge any intention to revoke Choice’s license.
The application for legal proceedings to commence in Belize have already been filed and should be prepared in the next few week, however, a number of questions remain. If Choice was able to secure an insurance policy which would have allowed it to repay its customers, why was Choice’s license terminated so abruptly and all its assets liquidated? Does the relationship between Choice’s director, Williams, and the Minister of Finance, his law-partner, play any role in the termination? On what grounds does Choice claim Grant and Barrow acted inappropriately? Why has the Central Bank not been more forthcoming regarding the reasons Choice Bank was placed under ‘enhanced supervision’? The Reporter will continue to follow this case as more questions or answers arise.