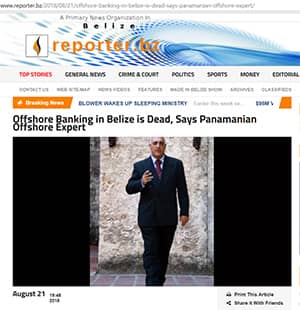 "The whole Belize financial system is dead for offshore operations. Nobody will trust a bank in Belize after this,” - Panamanian offshore banking specialist, Dr. Giovanni Caporaso Gottlieb told the Reporter this week.
Gottlieb represents several account holders of Choice Bank, whose banking license was terminated by the Central Bank in June. Choice Bank filed a lawsuit against the Central Bank last week via its attorney in Belize, Eamon Courtenay. The suit also named Minister of Finance, Dean Barrow and Attorney General, Michael Peyrefitte as defendants.
Peyrefitte declined comment when asked about the matter by the Reporter saying he would not speak since it is before the court. Gottlieb, however, told the Reporter that in his legal opinion, the reasons cited by the Central Bank to cancel the license were “fictitious.”
According to Gottlieb, Choice Bank had announced it would begin repaying account holders, but its license was terminated two days after the announcement and it was put into liquidation. Gottlieb says he agrees with the bank’s suit, which claims negligence on Central Bank’s behalf in handling the matter.
“Even if they had a reason why not intervene with the bank during the repayment period and cancel the license later?” Gottlieb questioned. He said that on May 8, 2018, Barrow wrote a letter to the bank issuing certain directives pursuant to Section 27(1)(e) of the International Banking Act which require, among other matters, that the Bank provide to the Central Bank: proof of its long-term investments including daily changes in their value; daily statements and supporting documentation of all accounts held at financial institutions; details and proof of all other assets and liabilities; accelerate the raising of funds necessary to meet its existing obligations to all depositors; cease all related party transactions except for Quadrant which the Bank does not agree is a related party under the International Bank Act; cease entering into any new contractual arrangements.
“Essentially these requirements make it impossible for the Bank to conduct any business without Central Bank or Minister of Finance approval, which has not been forthcoming to accelerate repayment of depositors. During this period the Central Bank never answered to the claims of the account holders,” Gottlieb said.
“Furthermore, on June 7, 2018 the Central Bank issued a press release confirming that the Bank is under enhanced supervision and that certain preventative measures were implemented on May 8, 2018.
The liquidator then fired almost all personnel of Choice Bank and now they will spend a fortune of the clients’ money investigating…. I would like to see the resumé of the liquidator’s employees,” he added.
Gottlieb said he understands that the Bank is seeking to have its license restored, but said the incident has cast a shadow over Belize’s offshore banking sector. Gottlieb added that he hopes the Court in Belize presides over the matter in a fair and objective manner. Courtenay confirmed to the Reporter that the claim had been filed in the court and he expects to get the papers back in the coming weeks, when the Supreme Court is back in session.