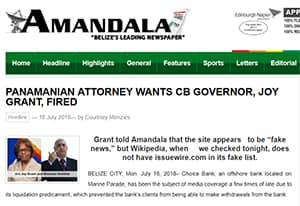 Grant told Amandala that the site appears to be “fake news,” but Wikipedia, when we checked tonight, does not have issuewire.com in its fake list.
BELIZE CITY, Mon. July 16, 2018– Choice Bank, an offshore bank located on Marine Parade, has been the subject of media coverage a few times of late due to its liquidation predicament, which prevented the bank’s clients from being able to make withdrawals from the bank.
On June 6, we learned that a client had filed a sworn affidavit claiming that Choice Bank was planning to wind down by the end of the month, which would result in the loss of substantial funds for the depositors.
However, Central Bank of Belize, which regulates all banks, including Choice Bank, released a statement on June 7, saying that, as of May, it had started executing preventative and corrective actions to ensure that Choice Bank could continue to address its customers’ financial needs and concerns.
On June 28, Choice Bank announced that it was emerging from its “constraint liquidity” and depositors would be able to make withdrawals again, with the maximum possible withdrawal amount initially being $25,000 US. In July, they would be able to withdraw $75,000 US and by August, $100,000 US.
By the end of the year, clients should have had access to all of their funds, should they want to close their accounts, said the bank.
The following day, on June 29, however, Central Bank’s governor, Joy Grant, released a video on Central Bank’s YouTube account, saying that, “Choice Bank failed to provide the Central Bank with a plan deemed satisfactory that indicated their ability or willingness to resolve the situation.”
The message continued by saying that Central Bank had a team of examiners conduct an examination at Choice Bank’s offices, and that the team acquired information that “had not been initially forthcoming.” Grant also said that the Central Bank has “concluded that the actions taken by the ownership and management of Choice Bank were insufficient to properly rectify the situation and appeared detrimental to Grant then announced in the video that they had revoked Choice Bank’s license and that they had appointed a liquidator named Henry James Hazel, whom they later replaced with another liquidator, Cedric Flowers, who, with the support of a team from Central Bank, would liquidate the bank’s assets and would distribute the assets in a “fair and equitable manner.”
It now appears that a Panamanian lawyer, purporting to be representing a large number of Choice Bank’s clients, has written an open letter to PM Barrow on July 7 on the website issuewire.com, asking for the dismissal of Grant as Central Bank’s governor on the basis that she had not “complied with the mandates that the laws of Belize impose on the Central Bank in relation to the Choice Bank crisis.”
The lawyer, who identifies himself as Giovanni Caporaso Gottlieb, who says that he is the director of Caporaso & Partners Law Firm, stated in the letter that he has been a practicing attorney for 30 years and specializes in offshore banking. He said that when Choice Bank first told its account holders that it encountered a lack of cash flow, he personally requested intervention from Central Bank, and they had not replied for six months.
However, as mentioned before, less than two days after Choice Bank had announced, on June 28, that it would allow withdrawals, the Central Bank suddenly revoked Choice Bank’s license and put it in liquidation, as the video of Grant indicated.
Concerning this, Gottlieb ostensibly says in the letter, “Seeing the ineptitude shown by Madame Governor during this lapse of time, we’re worried that this could establish a bureaucratic liquidation machine by naming inexperienced personnel and/or ‘friends of friends’ that might eat up our money in the process, whose plan is unknown and which appears more like a performance worthy of Pontius Pilate (washing his hands).”
The writer of the letter (purportedly Gottlieb) goes on to state, on behalf of the account holders, that they fear that their money, along with the reputation of Belize and its financial center, is on the line, and they would not want to have to resort to an attack on Belize in the International Monetary Forum.
Hence, according to the letter, they are asking for the immediate dismissal of Governor Grant, and for Choice Bank to liquidate its accounts under the supervision of a new leadership of the Central Bank, since, as stated in the letter, the current leaders “have been shown as being inefficient and haven’t complied with the laws of Belize.”
When we got in contact with Governor Grant, today Monday, however, she responded to the allegations by saying that the Central Bank has concerns over the authenticity of the open letter, since it was posted on July 7, on a website, issuewire.com, which “resembles that of other fake news websites.”
We checked Wikipedia’s list of fake news sites, and issuewire.com does not appear in it. Our other enquiries online also turned up no information as to the veracity of the news site.
Governor Grant concluded by saying, “It is worth reaffirming that the actions of the Central Bank, before and during the liquidation process of the said international bank, have been in strict accordance with the Laws of Belize.”
We attempted to get a comment from Choice Bank, but up to press time, were not successful.