If you have even a passing interest in the topic of Camouflage passports and Unrecognized Countries passports, then you should take a look at the following information. 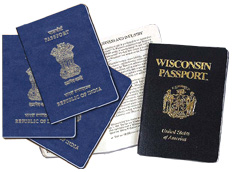 This enlightening article presents some of the latest news on the subject of Camouflage passports and Unrecognized Countries passports.
If you find yourself confused by what you've read to this point, don't despair. Everything should be crystal clear by the time you finish.
Camouflage passports are usually counterfeit document designed by the companies that sell them, to be carried by Americans (or other nationalities) that could be in danger in certain areas of the world simply because of their country of origin. Recently, passports issued by Unrecognized Countries are used as camouflage passport.
Most seem to be of good quality and will pass an inspection by someone not trained or ill trained, in the art of passport inspection.
I had a conversation with a special agent of the custom Department and asked him a couple of question about Camouflage Passports:
Me: “Are they legal”
Customs: “if used for their intended purpose, we have no problem with them”
M: Has anyone been caught trying to enter the United State with a Camouflage Passport?”
C: Oh yes, a number of times. Tell your readers we are aware of what the document look like to keep up on what countries still exist you might say it’s part of the job
M: “What about crossing into a third world country with a less educated border service?”
C: “I have heard of this situation occurring but personally
M: “A there any other uses for Camouflage Passports you can share?”
C: “In many countries one must surrender one’s passport to a hotel or innkeeper or even directly to the authorities. This procedure is designed to keep track of foreign nationals and in some extreme cases to prevent them from leaving the country.”
I know of times in this situation when a Camouflage Passport has been substituted for a real passport, although again I would want to be very, very careful about the sophistication of the forces involved before attempting this.
Of course the obvious use of a Camouflage Passport is to establish an ID (with back up documents) in order to open a bank account or perform other cash-involved transaction.
Most of camouflage passports are based on countries that no longer exist. If they were based on existing countries, they’d be forgeries and therefore illegal. To hold a camouflage passport is not illegal, a wrong use may be.
Camouflage passports are replicas of passports from countries that no longer exist or countries that have changed their names or by Unrecognized Nations. The countries generally were small out of the way places and the average official would know almost nothing about them. These documents are approved by the U.S. State department as a means of protecting U.S. citizens from religious fundamentalist, anti-wealth zealots, hijackers, thieves and terrorist, unscrupulous merchants, angry mobs, kidnappers and other dangerous groups. There have been many instances where holders of these documents have managed to escape danger simply because they were not carrying their regular first world passports.
Those who only know one or two facts about Camouflage passports and Unrecognized Countries passports can be confused by misleading information. The best way to help those who are misled is to gently correct them with the truths you're learning here.